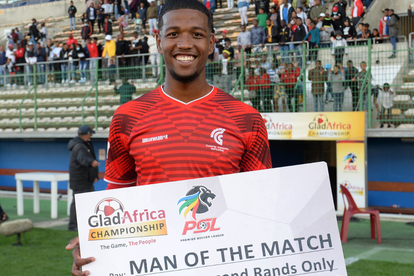 It seems like Cape Town Spurs are just playing hardball with Chiefs until the late days of the window. Image: @CapeTownSpursFC / Twitter

It seems like Cape Town Spurs are just playing hardball with Chiefs until the late days of the window. Image: @CapeTownSpursFC / Twitter

Do Kaizer Chiefs fans expect some more signings? Just a look at Mamelodi Sundowns and Orlando Pirates squads and the answer should be yes.

It seems like Amakhosi have signed and sealed harder deals such as Ashley Du Preez and Yusuf Maart, yet Dortley has not yet appeared at Naturena smiling with the love and peace salute.

Reports say the player’s representatives have decided to rather secure a move to Europe, despite Chiefs’ R3 million bid.

According to the latest report, the Glamour Boys have tabled an offer that is acceptable but the issue is with how the payments will be made. It is presumed that Chiefs are certainly unable to pay the full R3 million at this moment.

“Kaizer Chiefs could lose out on the signing of versatile defender Rushwin Dortley…” Soccer Laduma reported in their latest issue.

“It emerged that there was a snag in the payment plan agreement between Amakhosi and the player’s parent club, Cape Town Spurs.

“Indications are that the two clubs have so far not been able to agree on a payment plan on the fee that was agreed on in principle,” the report added.

WHY DORTLEY IS IN DEMAND

This is essential in protecting the ball and moving it fast. It’s even better if the footballer is 20 and trained at a high-standard academy like Cape Town Spurs (formerly called Ajax Cape Town).

Meanwhile, Dortley is now focused on making the final squad that will represent South Africa in the 2022 COSAFA Cup in July, where his value could increase.

Jose Riveiro on his mandate at Orlando Pirates: ‘There is nothing on paper’

On This Day: What happened on 01 September?

Daily devotion: Your bible verse and prayer for 01 September 2022