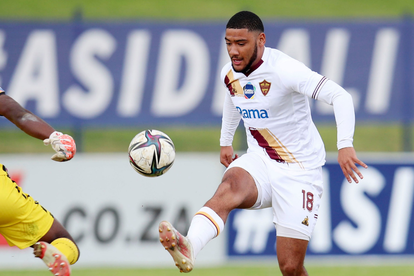 Following a stellar run in last season’s Multichoice Diski Challenge as Stellies’ top goalscorer, it is not too surprising to learn the 19-year-old Johnson at training with the Glamour Boys.

According to the report, the burly striker also participated in a friendly match for Kaizer Chiefs.

“According to sources, Fuad Johnson is currently training with the Gauteng-based side and an offer could take place for the free agent who recently parted ways with Stellenbosch in June,” Kick Off reported.

“It is understood that the 19-year-old featured in a friendly behind closed doors against the senior Chiefs side over the weekend.”

WHY HE LEFT STELLENBOSCH

The report added to explain the strange reason behind Johson’s departure from Stellies.

It is said that the player and his agent, Grant Nieuwenhuys, who also represents Dillan Solomons, felt the center forward deserved better than what the Cape Winelands club offered.

“Johnson’s potential switch comes after Steve Barker’s side and the player’s representative failed to agree on terms for a professional contract,” the report added.

Meanwhile, Arthur Zwane is sure to make at least one more signing for the number nine position after the departures of Samir Nurkovic and Leonardo Castro, while Ashley Du Preez has been the only arrival so far.

Hungarian Grand Prix: Here’s what time the lights out out in South Africa

Make or break: EIGHT Chiefs players have to deliver