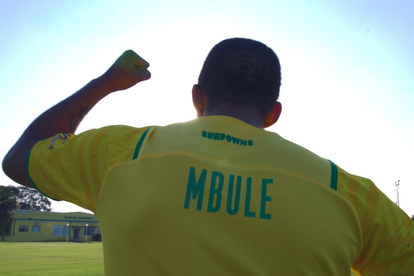 Sipho Mbule has ended up at Chloorkop rather Naturena. Image: @Masandawa / Twitter

Sipho Mbule has ended up at Chloorkop rather Naturena. Image: @Masandawa / Twitter

As The South African website reported last week, Mbule secured a three-year contract with the best club in the country, Sundowns. The deal sent shockwaves across Mzansi streets after Mbule had long been tipped to become a Chiefs footballer.

“I think the move to Sundowns, it’s like Sundowns are a team that have dominated over the years, they have a lot of good players and what’s more is that they are competing at the highest level,” Mbule told Sundowns’ media as per Soccer Laduma.

“I was playing CAF at SuperSport but we didn’t qualify for the next season and I’ve reached the final with them but I can do more with Sundowns.

“That is why I joined Sundowns, I want to play on the highest level and I want to win trophies.

“Winning trophies is a nice thing, it’s a nice feeling, it’s every player’s dream. It’s an achievement that you can look up to at the end of the day. I won two MTN8 with SuperSport United and I lost the [CAF] Confederations Cup final.