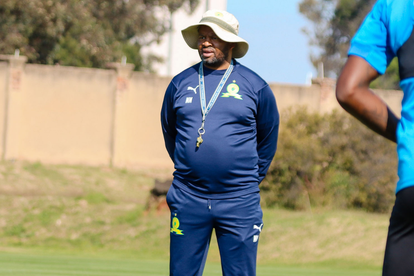 ALSO READ: Kaizer Chiefs set to be hauled back to the PSL DC over missed fixtures

During a recent briefing of the media for the weekend visit of Stellenbosch FC, Mngqithi was asked to share the names of the local coaches that caught his eye this season.

“I think coaches like Arthur and Dillon, Kobola at Baroka, if you look at the change they have made in a very short space of time, it requires that our South African media must also try and be a little bit less pessimistic towards our people,” Mngqithi said via iDiskiTimes.

“I think they deserve an opportunity and the support from you guys in the media because I do believe South African coaches are really showing [up].

“Look at Kurt Lentjies at Chippa, what he is doing – the team looks good, Kobola is doing very well and Arthur/Dillon [in a] very short space of time.

“But honestly speaking, I now want to watch matches that are played by these teams because I see a lot of what I can identify with of how South Africa expects football to be played.

“I do believe it is in that way, that we will even improve the quality of football, even in our national team, because if our games are not second ball and set pieces, it’s football and we are giving the chances to our own people, I’m definitely sure can take a very good direction.

“That’s my wish, we must try and be supportive to our people and not always point a gun at our South African coaches, please,” he concluded.