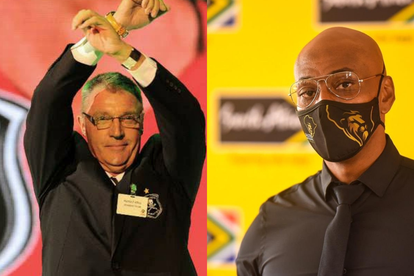 So Kaizer Chiefs have a funny Footballing Director in Kaizer Jnr.

To give the full context, former Orlando Pirates coach Ruud Krol publicly revealed his interest in taking over Amakhosi, but none of us imagined Jnr’s reply.

In case you missed our report over a week ago, the Dutchman was asked by one of the leading local reporters Lorenz Kohler, if he would consider Chiefs despite his legendary status of a double treble at Pirates between 2010 and 2012.

There is no way he would join the big enemy right? Well, Krol simply said he would not think twice about making the move to Naturena.

“I’ve no problem with that [joining Pirates rivals], I like yellow,” Krol told iDiskiTimes.

“I like yellow, yellow is one of my favourites, not a problem,” the 73-year-old Dutchman added.

“We don’t wear yellow,” Jnr said before adding a wink emoji. For those of us who may not get the joke, Jnr actually means that Kaizer Chiefs wear gold, not yellow.

Kaizer Chiefs have shown to be capable of major shocking appointments just like Pirates. Take the return of Ernst Middendorp to Amakhosi as an example.

So Arthur Zwane, assisted by Dillion Sheppard, have been given a trial to prove themselves until the end of the season. Meanwhile, the Motaung’s will be watching while also eyeing bigger, proven candidates from the outside. Read the full story here.