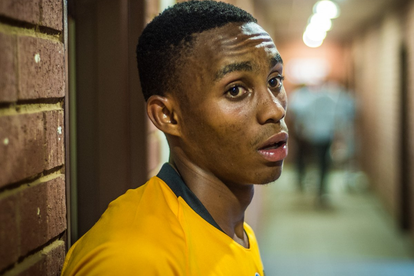 Former Kaizer Chiefs coach Gavin Hunt always tells it like it is. Hunt has said that Njabulo Blom is wasting his talent in defence. Isn’t that so characteristic of Gavin?

As we may all remember, Hunt’s time at Amakhosi was marked by a lot of young players getting a run in the first team, that is what fans love.

If one youngster played his very best football under Hunt, that player is the 22-year-old Blom.

While he has played at right-back, central defence and in midfield, Hunt believes the boy is best suited in the number six role.

“I get to Chiefs and I see this boy Blom,” Hunt said on DiskiTalk with Luyolo.

“I see he’s got an engine. Very placid boy, needs to change, he needs desire to wanna win.

“If you look at the people we had in midfield, you had people… the legs were gone. To be fair they were a great service to the club but their legs were gone.”

NJABULO BLOM SHOULD NOT PLAY IN DEFENCE SAYS GAVIN HUNT

The former Hellenic, Black Leopards, Moroka Swallows, SuperSport United and Bidvest Wits coach, who’s won four PSL titles, added to stress how much Blom was not a defender in his eyes.

“Blom came in, they told me he was a wing-back, a right-back, which is, for me, no, he’s midfield player,” Hunt added.

“He’s got energy, he’s got legs. Midfield players, modern midfield players goto go box to box and they goto close the space down both ways.

“So you need legs… and he can play a little bit. He is a player that you can sign two less players. You understand? Now that goes near my thinking.

“He can play three-four positions. Now you’re talking my language. So when I saw him, he was perfect,” the former Amakhosi coach concluded.