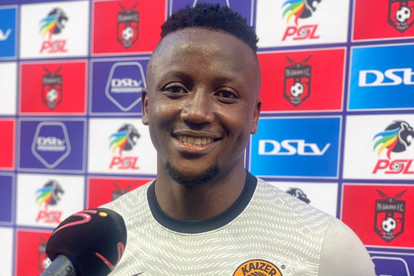 Kaizer Chiefs fans may be forgiven for feeling a little jealousy over this one. Bruce Bvuma has revealed Bucs legend Moeneeb Josephs is his number one role model.

Speaking in a recent interview with one of the leading local journalists, Mazola Molefe, the 26-year-old Bvuma was simply asked to name his goalkeeping role models.

“Those are the guys I have looked up to. And it’s obvious that with Moeneeb and Itu, it is because they have also been Bafana Bafana goalkeepers.

“Neuer elevates the standard of goalkeeping. He is something else. He is like a wall that guy.

“That is our Lionel Messi as goalkeepers, to be honest,” Bvuma concluded.

Meanwhile, Bvuma remains the number two option as the superb Brandon Peterson continues to own the Amakhosi gloves.

While the Amakhosi faithful have been bemoaning the club’s latest trophyless season and uninspired performances on the pitch, a random video has emerged and gone viral on Twitter.

The footage sees Kaizer Chiefs players emerging out of the tunnel towards the pitch. It is one thing to be singing in high spirits, but this is different.

ALSO READ: Orlando Pirates’ former star – ‘I got money and wanted to date my teacher’