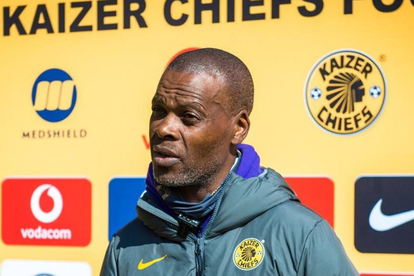 Kaizer Chiefs’ interim coach Arthur Zwane seems to be fitting his pieces as he pursues the real Amakhosi playing identity – thanks to a narrow 1-0 victory over Sekhukhune United last Saturday.

KAIZER CHIEFS GRAB AN AWAY WIN AT SEKHUKHUNE UNITED

As The South African reported on Saturday, the Glamour Boys made the short trip to the Emirates Airline Park (former Ellis Park) and returned with maximum points – thanks to a Ramahlwe Mphahlele finish in the first half.

But it was a certain performance in midfield that left coach Zwane itching for the next game and next season: Sabelo Radebe impact alongside Nkosingiphile Ngcobo as double eights.

Following  Zwane’s call for ball domination and arrogance in attack – as per Kaizer Chiefs tradition – the 22-year-old Radebe aka Bibo stood out.

“What I’m happy about is seeing Sabelo Radebe fighting and fit in so well,” Zwane, who hails from Meadowlands, Soweto said.

“I’m happy for him. Hopefully, he’ll start enjoying himself because he is one player that is very, very good on the ball.

“At Kaizer Chiefs we want to play football, we don’t just want to kick the ball forward.

“So I’m happy for Sabelo and many other players as well. “

Zwane, who was fondly known as ‘10111’ during his days as a goalscoring and assisting right-winger, also took the moment to appreciate Mphahlele and Ngezana in defence.

“Rama as well, he led the team very well at the back and guiding Siya [Ngezana] as well,” Zwane said.

“Siya started very, very slow but during the game the confidence got better and I’m just happy for them and let’s hope we take this to the next game,” he concluded.

Meanwhile, Kaizer Chiefs return to training on Monday to prepare for the final game of the season.

Amakhosi will be at home to Swallows FC, a team that will survive or suffer relegation on the day, while Zwane’s side may secure a CAF Champions League spot on goal difference.