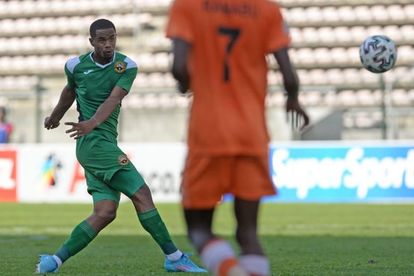 Ryan Baartman could make a life-changing swith from All Stars to Kaizer Chiefs. Image: Facebook

Ryan Baartman could make a life-changing swith from All Stars to Kaizer Chiefs. Image: Facebook

One thing is clear, Kaizer Chiefs will sign at least one or two new central defenders. This also indicates that one of the senior players in the number five role is surely set to leave.

Following a fabulous role to help Cape Town All Stars finish third in the GladAfrica Championship, Amakhosi have reportedly contacted the club for the towering central defender Baartman.

“iDiski Times have learnt that Kaizer Chiefs have made contact with Cape Town All Stars about their defender Ryan Baartman,” the outlet reported.

“Baartman, who was part of the Cape Umoya side last season has caught Amakhosi’s eye after a great season with Igugu Lekapa.

“The 24-year-old is a former youth player at Cape Town City, and also spent time at Chippa United and Steenburg United,” the report concluded.

Meanwhile, Baartman becomes Kaizer Chiefs’ fifth central defensive target option for next season and the second from Cape Town after talking to Spurs about Rushwin Dortley.

Chiefs scouts and its supporters are set to have a closer look in the upcoming PSL/GAC Relegation-Promotional Play-Offs in the coming weeks.

The latest name that emerged before Baartman was that of SuperSport United’s Luke Fleurs, a 22-year-old central defender. So who else is on the list? Read the full story here.