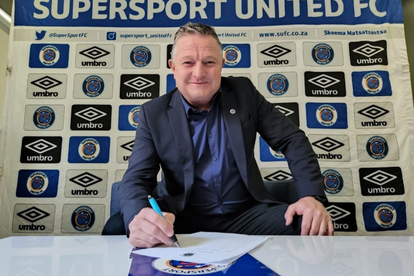 Gavin Hunt as Kaizer Chiefs coach has long become a thing of the distant past, yet the now SuperSport United coach still feels some regret over his time with the Glamour Boys.

As it was well-covered across local media, the four-time PSL champion made the biggest move of his career to Kaizer Chiefs in 2020.

Sadly, Hunt only lasted eight months before parting ways with the Soweto giants in May 2021. He only managed 12 wins, 17 draws, and 15 defeats in 44 games.

ADMISSION OF HURT AND DISAPPOINTMENT

Following a sparkling start that has placed SuperSport in third place, the Cape Town-born coach has suggested he was never given a full opportunity to succeed at Kaizer Chiefs.

“It’s very difficult, you’re a coach for 27 years, you’ve never been and all of a sudden you get fired twice in six months and then you say I’m you go from there,” Hunt said via Soccer Laduma.

“Ja, I mean you all know what happened at those clubs, the first club [Kaizer Chiefs] (Hunt made a handcuffed gesture), you’ve got no chance and it’s sad because I really felt that I would win there but it doesn’t work like that.

“But here, we’re back at SuperSport, we’ll give it a go, we need to and we’ve got good youth there, there’s a good crop underneath eleven but it needs a little bit of time,” he added.

“As I said, we need to nurture it, I think the biggest thing is you’ve win games that you shouldn’t win, you understand what I’m saying.

“And try to turn losses into draws and those types of things and if you can do that, then you’ll get consistency and you’ll have a good team. But it takes time,” he concluded.