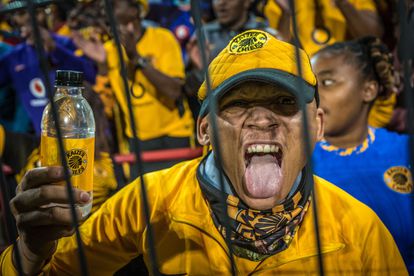 A Kaizer Chiefs fan expresses all possible passion he has for Amakhosi. Image: @KaizerChiefs/ Twitter

A Kaizer Chiefs fan expresses all possible passion he has for Amakhosi. Image: @KaizerChiefs/ Twitter

What was he thinking? Kaizer Chiefs fans never take kindly to mild jokes on Amakhosi, not to mention the rather personal one Tim Sukazi threw at the club.

TS Galaxy boss Tim Sukazi has suggested the Glamour Boys don’t really have ‘Amakhosi on their side’ like his team has.

While building up to the new 2022/23 season, The Rockets’ boss had a chat with local media where he found a moment to bravely tease Kaizer Chiefs.

Speaking to iDiskiTimes last week, Sukazi claimed that TS Galaxy is the team that are actually blessed by Amakhosi.

The Rockets won the Nedbank Cup in 2019 as they beat Amakhhosi 1-0 with the famous late penalty by Zakhele Lepasa.

“Some call themselves Amakhosi, but they don’t walk with Amakhosi,” Sukazi said as quoted by Lorenz Kohler.

“I can even get my Nedbank Cup trophy and show them we are blessed by Amakhosi,” Sukazi added.

Following the brave jibe from Sukazi, the Amakhosi faithful were quick to let the Galaxy boss know the joke is not funny.

“I think it’s disrespectful for a Chairman to talk about other team like this! This is totally unacceptable sir,” said another.

“He must ask lot of chairmen about the consequences of disrespecting Kaizer Chiefs,” said another warning.

Chiefs will be away in Durban against Royal AM on Saturday 6 August at 17:30 from the Chatsworth Stadium, while Sukazi’s Galaxy will take on AmaZulu at the Mbombela Stadium on Sunday at 15:00.

What is your take on Sukazi’s jibe at Amakhosi? Let us know in the comments section below.