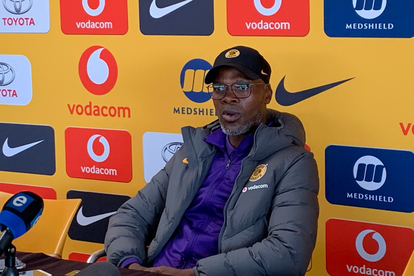 A few former Kaizer Chiefs players seem to have annoyed Arthur Zwane a bit. The Amakhosi coach has made an example of them to the new faces at Naturena.

Ahead of the club’s first home game of the season against Maritzburg United and after losing to Royal AM last weekend, Zwane was captioned sending a rather earnest message to his players at Naturena.

The former winger is heard saying “We’re building a family here, we want each and every one of you to leave a legacy here,” Zwane said.

“Don’t just come and add numbers. Leave a legacy, be proud when you leave this team.“

A SWIPE AT LEONARDO CASTRO AND DANIEL CARDOSO?

The man known as “1011” further went on to take make a reference to recently departed players who sent out some controversial statements about the club in the past month.

“Don’t be like others, I don’t want to mention names,” Zwane said with an obvious reference to Dumisani Zuma, Leonardo Castro, and Daniel Cardoso.

“Given the opportunity but when they are out [released from the club], they talk bad about the team.

“You know why? Because they were on a gravy train.

“The time is over. We are here for business. Like I’ve been saying, let’s all be businessmen in football. Let’s make enough money,” he added but the video unfortunately ended abruptly.

Check out the clip here as shared by @7_ball_ via Twitter.

Meanwhile, the Glamour Boys are set to battle the Team of Choice on Tuesday evening at 19:30 from the FNB Stadium.

‘You are cursing your wedding’: Nota slams Berita’s gig guide