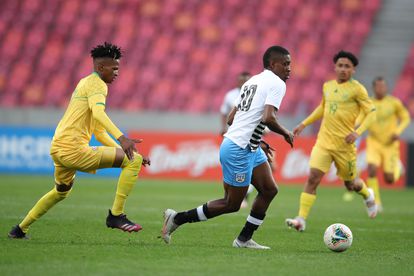 Austin Dube made his debut for Bafana Bafana in their 1-0 COSAFA Cup victory over Botswana but it was his incredible long-range assist for Kagiso Malinga’s winning goal that left social media impressed.

Dube, a central-defender is set to join Kaizer Chiefs after reportedly securing a move to the club from Richards Bay FC, the same team that sent the Amakhosi crashing out of the Nedbank Cup’s round of 32 this season.

“According to Siya sources privy to player transfers at Naturena, indications are that Kaizer Chiefs and Richards Bay have reached an agreement on the sale of defender Austin Dube, who is currently with Bafana Bafana at the COSAFA Cup.” a SoccerLaduma report read.

“Kaizer Chiefs are understood to have been tracking the player for several months now and biding their time until the sanction on signing new recruits was lifted at the start of July.

“Dube, 28, has been one of the stand out players at Richards Bay in the GladAfrica Championship and was part of the team that that shocked his soon to be new employers in the Nedbank Cup second round in February.”

Kaizer Chiefs are deep in preparations ahead of their upcoming CAF Champions League final against Al Ahly which takes place on 17 July 2021 in Casablanca, Morocco. They’re expected to announce a number of new signings after the eagerly anticipated final.