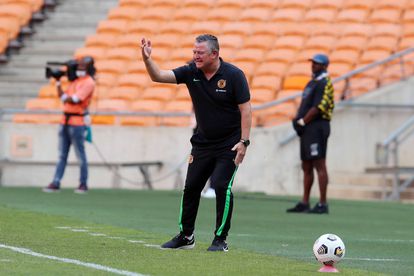 Gavin Hunt, coach of Kaizer Chiefs during the DSTV Premiership 2020/21 match between Kaizer Chiefs and Mamelodi Sundowns at the FNB Stadium, Johannesburg on the 24 October 2020 ©Muzi Ntombela/BackpagePix

Gavin Hunt, coach of Kaizer Chiefs during the DSTV Premiership 2020/21 match between Kaizer Chiefs and Mamelodi Sundowns at the FNB Stadium, Johannesburg on the 24 October 2020 ©Muzi Ntombela/BackpagePix

Kaizer Chiefs head coach Gavin Hunt has revealed a rather strange tactic he’s looking to master with the Amakhosi.

Generally, a team of the magnitude of Kaizer Chiefs would focus on dominating possession however Gavin Hunt has revealed that his side are happy to give up possession of the ball in order to get better.

The Amakhosi scored two early first half goals through youngsters Happy Mashiane and Ngcobo to hand them a 2-0 lead at half-time however Hunt’s team-talk at the break was rather bizarre.

“Yeah, they are a home side, they going to come at you, they are 2-0 down, as I said I don’t think they could have scored, they played in front of us the whole day,” Kaizer Chiefs head coach Gavin Hunt told SuperSport TV following the match.

“I said at half-time, ‘Let them have the ball, let’s not go out there, let’s let them have the ball’ but we didn’t do it, then you have the last five minutes frantic, you know. If we just keep our shape, the balance and that’s what we have to learn, better not only at Kaizer Chiefs.

Our schedule is taking its toll on us – Gavin Hunt

“No one has a programme like us, we went to Cameroon, come back we have a game in two days’ time, you could see they never played on Wednesday, they had more energy. We played Wednesday, back up and down and it takes a toll on a small squad like us.” the Kaizer Chiefs head coach added.

“What we gotta do is try to get through the period and try do do better, they are good football side, they play, we had to dig in and that’s all we can do.”

Kaizer Chiefs next turn their attention to PSL newcomers Tshakhuma Tsha Madzivhandila who they face in a DStv Premiership clash on Tuesday evening at the FNB Stadium.