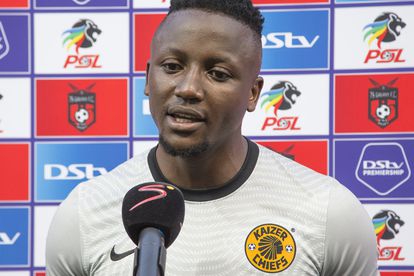 Fresh off confirming the departure of no fewer than NINE players, a further two Glamour Boys will be heading to North Africa shortly. Photo: Dirk Kotze/BackpagePix

Fresh off confirming the departure of no fewer than NINE players, a further two Glamour Boys will be heading to North Africa shortly. Photo: Dirk Kotze/BackpagePix

Kaizer Chiefs goalkeeper Bruce Bvuma says that the team are focused on improving their performance after a disappointing opening day stalemate against TS Galaxy.

Bvuma was delighted to start in goal for Kaizer Chiefs but less enthused about the result. The stopper ended with a clean sheet but Kaizer Chiefs shot blanks up front and took a share of the points away from the Mbombela stadium.

Speaking to the club’s website, Bvuma said: “I can’t say I am happy (with the result against Galaxy) because as Kaizer Chiefs we are aiming to get three points.

“We did not get all three points, but it’s part of the game. A point is better than nothing. I am happy I kept a clean sheet, but we did not win, so it did not feel that great.”

Bvuma added that Kaizer Chiefs would set out to make the FNB Stadium a fortress this season.

“They are coming to Soccer City and I feel we as Kaizer Chiefs need to dominate. We need to make FNB a slaughter house, where teams are scared to come play. It’s important that we show it when we play Baroka that we mean business.”

Bvuma hadn’t featured for Kaizer Chiefs since the Caf Champions League campaign but he earned a callup to the Bafana Bafana squad for the Fifa World Cup qualifiers. He is eager to soak up as much as he can on international duty in the upcoming window.

“It’s always an honour to be picked to represent the country,” the Chiefs keeper said.

“I am one of the 23 players who were chosen, so I am happy to represent South Africa in the World Cup qualifiers. I am happy and I am looking forward to this camp. As you saw, the players who were chosen are young and exciting players. I am looking forward to being there and getting all the experience I can and doing it for the country. I am forever grateful.”