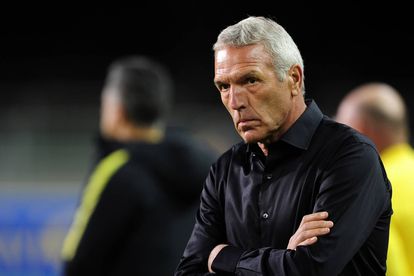 Kaizer Chiefs suffered a 2-1 defeat to Maritzburg United, crashing out of the Telkom Knockout, which left coach Ernst Middendorp ruing some costly errors during the course of the game.

Two goals from striker Judas Moseamedi came on either side of a Yagan Sasman strike, which wasn’t enough to prevent a first defeat since September for the losing side.

Maritzburg, on the other hand, carried on in their merry way, having not lost since the same month.

Moseamedi put the Team of Choice ahead in the first half, capitalising on a defensive lapse from the usually solid Daniel Cardoso, whose intended clearance only ended in the path of the striker.

Soon after Chiefs had capitalised in the second half, he was caught unattended as he directed a cross into the net to make it 2-1.

Middendorp – a former Maritzburg United coach – congratulated his ex-charges for what he felt was a deserved win.

“Congratulations to Maritzburg United, I think a deserved win, there’s no doubt about it. After we conceded 1-0 in the first-half, absolutely challenges with our defence despite we were sometimes two against one, three against one,” Middendorp told SuperSport TV after the match.

“A bit surprisingly, on the other side in terms of our combination game through the midfield it was not really a factor as it could be, should it be, how we can do it, good.

“Then of course you equalise, then you give it away again, a little bit surprising with the quality we should have. It was not definitely the performance what we have seen today, what we are capable of.”

The German mentor felt that his charges did not bring their A-game against the KwaZulu-Natal side.

“Always world wide something when you’re going to the game, you’re just not really… bring your concentration to the point where it should be. You’re already in this game playing [Mamelodi] Sundowns on the 14th [December].

“We spoke about it several times, I said, ‘Please don’t underestimate [Maritzburg]. Please make sure that we’re first taking this game before we think about the next one’.

“That’s a normal way, it’s nothing unusual, it happens world wide. I was thinking we would be able to handle it but opposite we failed here.”

Chiefs return to action in the league on Wednesday, as they travel to Cape Town for a clash against Stellenbosch FC.