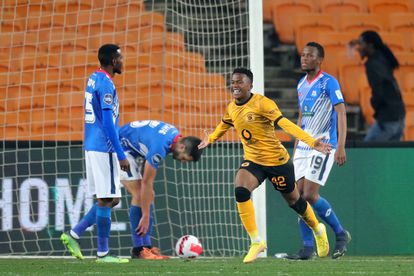 Mduduzi Shabalala and Samkelo Zwane need to be thrown into action in the right games according to the legendary attacker.

Shabalala, 18-year-old striker, already has a goal for Chiefs this season in his only appearance for the club.

And now, Maponyane believes the striker needs to get more game-time once the league returns after the 2022 FIFA World Cup break.

Samkelo Zwane on the other hand made 1 cameo appearance for Chiefs in the DStv Premiership but this isn’t near enough for ‘Mafa’.

“Zwane and Shabalala, those boys should be thrown into the fray. Not only during a friendly game like the Carling Cup but even in the league,” the Kaizer Chiefs legend told FARPost.

“But unfortunately, you also have to be very careful what you say as a former player.

“I have been in that situation. When you are young like that, you don’t just get thrown into the fray when the team is losing 1-0, so Kaizer Chiefs have to win 2-0 to 3-0, then put in those boys.

“However they seem to battle to win by a decent margin that will allow the coach to play the youngsters.”

In other news, Orlando Pirates star Zakhele Lepasa has opened up on his feud with Kaizer Chiefs and more importantly Arthur Zwane.

Lepasa, 25-years-old now, has revealed the grim details of a ‘ failed trial’ at rivals Amakhosi when he was 16.

Arthur Zwane who was the Kaizer Chiefs Under-17 coach at the time didn’t give Lepasa a chance to trial due to his tiny nature!

“So, he calls me [when I arrived for training at Kaizer Chiefs]. And this other guy is like, ‘okay, this is the boy’. Then Arthur Zwane was like, ‘oh, this is him’.” Lepasa told FARPost.