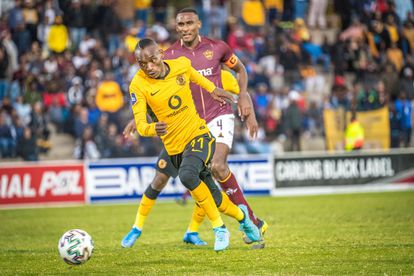 Kaizer Chiefs started life without Stuart Baxter on a losing note, going down to Stellenbosch FC at the Danie Craven Stadium on Saturday. Photo: Twitter @KaizerChiefs

Kaizer Chiefs started life without Stuart Baxter on a losing note, going down to Stellenbosch FC at the Danie Craven Stadium on Saturday. Photo: Twitter @KaizerChiefs

Amakhosi have EVERYTHING to play for – respect, CAF Champions League football and Soweto pride are all at stake when Kaizer Chiefs take on Mamelodi Sundowns in the DStv Premiership!

READ | KAIZER CHIEFS VS MAMELODI SUNDOWNS: TOP 3 LEGENDS TO PLAY FOR – OR COACH – BOTH TEAMS!

Chiefs play host to PSL champions, Sundowns at the FNB Stadium on Sunday.

Chiefs have to win their remaining matches in the DStv Premiership if they are to qualify for the CAF Champions League next season.

Meaning, Arthur Zwane and Dillon Sheppard have to find a way to motivate their side to achieve the unthinkable – conquering The Brazilians! Defeating the side that has won the last FIVE PSL titles. There is no other option but a victory for Amakhosi at the FNB Stadium.

However, it is so much deeper than CAFCL football next season…

2) PRIDE AND RESPECT FOR THE CLUB AND AMAKHOSI SUPPORTERS

The pride and respect of Chiefs as a football club and their supporters are on the line too.

This is because they are desperate for a noteworthy win, to save some face and restore some dignity after a lacklustre season.

Royal AM completed the double over Chiefs. The Glamour Boys succumbed to a shocking record four losses in a row before winning 1-0 against Marumo Gallants last weekend, according to SoccerLaduma.

Amakhosi are desperate for a win that will allow Amakhosi supporters to hold their heads up high.

Finally, the Soweto Giants want to finish above their arch rivals, Orlando Pirates. The Bucs are right on their tales and a loss against Sundowns will allow Pirates an opportunity to leapfrog Chiefs who sit on 42 points while Pirates have 40 after 27 matches each.

The Buccaneers will not be in action in the league this weekend as they face Al Ahli Tripoli in their CAF Confederation Cup semi-final on Sunday.

This is it, this is the game they have to win, the match that can place Zwane and Sheppards in high regard amongst Kaizer Motaung and Chiefs fans.

The match that will restore pride and respect while igniting their CAF Champions League fight back.