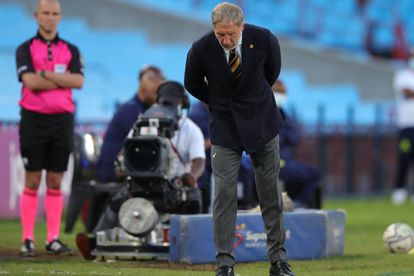 The 2021/22 DStv Premiership season will be another trophy-less affair for long-suffering Kaizer Chiefs supporters, if bookmakers are to be believed. ©Samuel Shivambu/Sports Inc

The 2021/22 DStv Premiership season will be another trophy-less affair for long-suffering Kaizer Chiefs supporters, if bookmakers are to be believed. ©Samuel Shivambu/Sports Inc

Kaizer Chiefs have confirmed that no less than six players will be away from the club during the current international break.

The Amakhosi began the season in disaster form having picked up just six points from their opening six DStv Premiership matches.

Kaizer Chiefs were also dumped out of the MTN8 during the first round at the hands of Mamelodi Sundowns, albeit via a penalty shootout.

Stuart Baxter will undoubtedly be looking to make maximum use of the current break to fix many problem areas on the training pitch however, six of his key players won’t be around.

The Amakhosi confirmed that Bruce Bvuma, Njabulo Ngcobo, Njabulo Blom, Sfiso Hlanti, Daniel Akpeyi and Khama Billiat will all be participating in the ongoing Fifa World Cup qualifiers for their respective nations.

“Kaizer Chiefs have six players who have headed out to represent their country in FIFA 2022 World Cup Qualifying games, as the race to reach Qatar for next year’s showpiece event heats up.” a Kaizer Chiefs statement read.

“Khama Billiat has heeded the call and headed off to join up with the Zimbabwe national team, while Daniel Akpeyi is once again part of the Nigeria setup. Four Amakhosi players will be in the South Africa squad as they prepare for the challenge from Ethiopia.

“Furthermore, Kaizer Chiefs analyst Mark Davy has once again been invited to join the Bafana technical team for the qualifiers. Chiefs wish all their players on international duty the best of luck, as well as coach Hugo Broos and his Bafana Bafana squad in their vital clashes with Ethiopia.”

Kaizer Chiefs return to action on 16 October 2021 with a mouth-watering clash against Chippa United who are managed by former Amakhosi mentor Gavin Hunt.