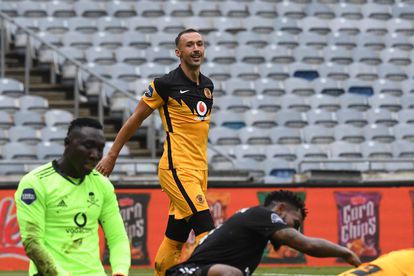 Former Kaizer Chiefs striker Collins Mbesuma believes that the club should keep faith in Samir Nurkovic as their penalty-taker despite seeing his effort in the Soweto derby swatted away.

Mbesuma does not believe that Kaizer Chiefs should revert to using Daniel Cardoso as their designated penalty-taker and backed the Serbian to come good from the spot.

Cardoso netted four of the five penalties he lined up to take during the 2019/20 season, but Mbesuma believes the job is best left to a forward.

“As a striker you have to take responsibility because that is our department you know,” Mbesuma told KickOff.com.

“Like when penalty comes as a striker, you have to step up.”

Mbesuma says that although he never had the responsibility of taking a penalty in the Soweto Derby he would have jumped at the chance as should any top marksman.

“I think for me personally I can’t allow that, because that is my department. But I think the Derbies I played, I never got a chance to take a penalty there. We didn’t have any penalty in the Soweto Derby. But if a penalty comes, I have to take responsibility.”

Kaizer Chiefs haven’t won in the league since 19 January when a 3-0 triumph over TTM gave them their third triumph on the bounce, since drawing twice and losing to Orlando Pirates in the derby.

Nurkovic had a chance to level the scores for Kaizer Chiefs in the second half of their DStv Premiership clash at Orlando Stadium but couldn’t beat the Sea Robbers stopper Richard Ofori.

Chiefs will next be pressed into action against National First Division club Richards Bay FC in the Nedbank Cup round of 32 on Sunday and a week later will face a trip to Morrocco to take on Wydad Casablanca in the Caf Champions League.