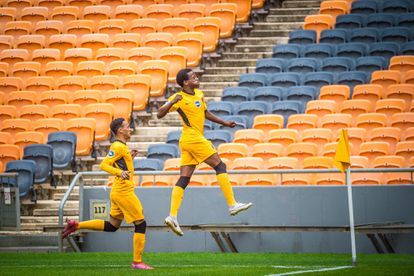 Another Kaizer Chiefs starlet has raised his hand for promotion to the first team with a hat-trick against Marumo Gallants.

Duba opened the scoring in the fourth minute before completing his brace for Chiefs in the 21st minute.

The speedy attacker would then make it 4-0 for Chiefs in the dying minutes of the game after Bakalazi’s 60th minute strike for his third goal of the day.

SECOND HAT-TRICK IN AS MANY GAMES FOR KAIZER CHIEFS

Duba became a second Chiefs player to score a hat-trick in as many weeks after Mduduzi Shabalala’s treble against Royal AM last week.

The two rising stars are definitely doing the most in their quest for promotion to the Chiefs senior team.

In fact, Shabalala has already been part of the senior team after being named on the bench for Chiefs against Sekhukhune United in December 2021.

And Duba will hope for the same fortune now that he has scored a hat-trick for Chiefs, especially with the club in need of quality strikers.