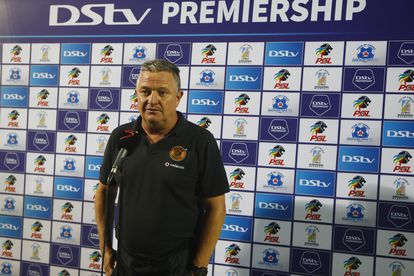 Stellenbosch FC midfielder Phathutshedzo Nange is officially a Kaizer Chiefs player, and this is according to coach Gavin Hunt.

Nange trained with Amakhosi for a few weeks at the start of the season but he left the club to join Stellenbosch on a one-year deal.

Now, Hunt has confirmed that Nange was actually signed by Chiefs before being allowed to join Stellenbosch due to the transfer ban that was imposed on the club.

“Phathu was signed at the beginning of the season and obviously the ban came into effect,” confirmed Hunt in an interview with Robert Marawa on Radio 2000.

“So, the best for him was to not just sit around and he joined Stellenbosch and went out and played and he’s done well,” he said.

“In my understand, yes, he was signed at the beginning of the season and he was let go to play,” concluded Hunt.

The pair worked together at Bidvest Wits and were set for a reunion at Naturena until Amakhosi failed to get their transfer ban uplifted.

Last week, Nange scored for Stellenbosch against Chiefs in that 2-2 draw in the league and he didn’t celebrate.

His decision to not celebrate raised a few eyebrows, and while Nange tried to downplay the rumours that he is actually on his way to Chiefs, Hunt has now confirmed the news.

Nange, 29, has featured 17 times for Stellies this season, scoring four goals and grabbing three assists for Steve Barker’s side.