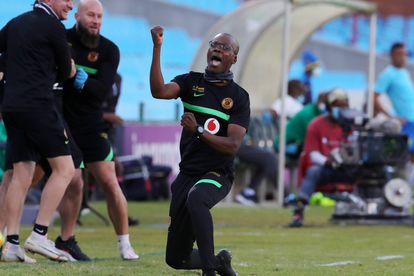 Kaizer Chiefs stand-in coach Arthur Zwane has admitted that Amakhosi will not be at full strength for their next DStv Premiership match. Photo: Samuel Shivambu/BackpagePix

Kaizer Chiefs stand-in coach Arthur Zwane has admitted that Amakhosi will not be at full strength for their next DStv Premiership match. Photo: Samuel Shivambu/BackpagePix

Stuart Baxter has officially confirmed that he will be utilizing young co-coaches Arthur Zwane and Dillon Sheppard off the bench.

Both men have been rewarded after working wonders with Chiefs during their short stint with Amakhosi.

Baxter has confirmed that he will be using both coaches off the bench to help guide Amakhosi next season.

“In terms of the bench, I think that we’ve worked on the assumption that Arthur and Dillon will be on the bench, and Molefi stays in touch with us from the stands,” Baxter stated.

Zwane and Sheppards took over after former coach Gavin Hunt was sacked.

They had an immediate impact on the club and player’s. Galvanizing the men from Naturena to finish in the MTN Top 8. This, after securing back-to-back wins in their final two matches.

Chiefs languished in 11th position when the young co-coaches took over. This was only the beginning of what these men achieved with the side.

Amakhosi would go on to secure famous victories over Simba SC and Wydad Casablanca on their way to a first-ever CAF Champions League final. These coaches brought out the best in their players. They had brought back the spark and passion that had been missing all season.

Now, they will be working side-by-side with the man that last brought them silverware.

Baxter won the 2015 PSL with Chiefs and is looking to end a 6-year trophy drought that they have had to endure since he left the club.

With the squad he is building, some fantastic signings and these men on his side, Amakhosi can return to the top next season.