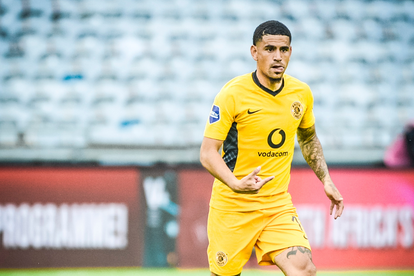 Kaizer Chiefs star Keagan Dolly got onto the scoresheet once again for the Glamour Boys thanks to a fine freekick.

Dolly put the Glamour Boys in cruise control against Swallows with a well taken setpiece on the stroke of Half-time at the Dobsonville Stadium.

The towering forward expertly finished a delicious Kgaogelo Sekgota cross to hand the Glamour Boys the lead against Swallows in the 34th minute.

At the time of posting, the Glamour Boys lead 2-0 at the halfway mark. Follow the rest of the match here.

“We are always starting very slow and we gave them the time and space to play on the ball in their build-ups.” the Kaizer Chiefs coach told SundayWorld following his side’s previous match.

“From those build-ups, you could see it was a warning, they had about two chances that they could have capitalised on before they scored the goal.