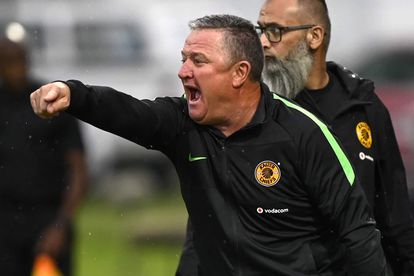 Kaizer Chiefs coach Gavin Hunt was not pleased with the many chances his side left out on the field during Saturday’s encounter against Golden Arrows.

Amakhosi returned with a point from Sugar Ray Xulu Stadium, after fighting back from a goal down to take a short-lived lead, with Abafana Besthende levelling things before the contest ended with the two sides square at 2-2.

Speaking after the game, the former Bidvest Wits mentor bemoaned the result, which ensured that his side remained in the bottom half of the table with a single victory in their four matches.

It’s disappointing that we came away with a draw. I’m really disappointed with a 2-2 draw,” he told Supersport TV.

“I thought we had the game in control, we had so many opportunities, and you can see why we haven’t scored in seven games. The chances we missed, really. One-on-one with the goalkeeper.

“In the first half, it could have been three or four more there. In the second half as well, we played some good stuff. Our defending has also been a problem.

“But I mean, from where we had been and where we are, I’m disappointed but it’s a good sign that we’re disappointed because we expected more, that’s for sure.”

How Arrows held the Glamour Boys

Chiefs fell behind early in the second half after the referee adjudged willard Katsande to have fouled Arrows’ Pule Mmodi inside the box. Siboniso Conco converted the resulting penalty.

A Leonardo Castro header pulled the visitors level, before the Colombian was on the money again, finishing off a fine team move to make it 2-1.

Kaizer Chiefs now shift focus to the Soweto Derby against Moroka Swallows in Dobsonville on Tuesday. Kick-off is at 19:30 (SAST).