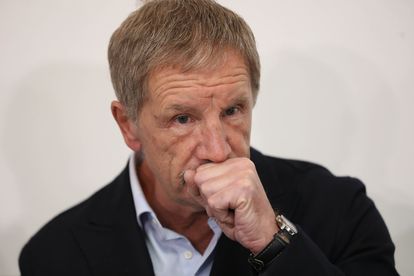 In an interview with iDiskiTV, Khanye admitted that Chiefs have a formidable squad but he was so not convinced if they will be well coached.

Khanye said Baxter’s name is already dented after losing the final of the CAF Champions League final to Al Ahly in July.

However, Khanye gave credit to Baxter in the way Chiefs created their second goal during the 2-2 draw against Mamelodi Sundowns which ultimately ended in a 2-1 penalty shootout loss.

“Kaizer Chiefs have players but the coaching will cost them,” said Khanye.

“He [Baxter] has already lost in the CAF Champions League final while on the bench. It dented his name.

“He is out now, in the MTN8. He waited for Sundowns. He relied on transition. We have to be honest. Sundowns… goal number two, yes, it’s them (Chiefs),” added Khanye.