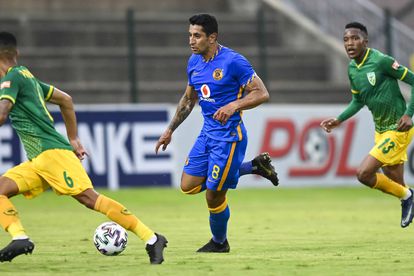 Kaizer Chiefs have been handed a timely boost in the form of the return of star attacker Leonardo Castro.

Castro broke his nose during a DStv Premiership clash against Stellenbosch FC on 06 April 2021 during a 2-2 draw. The Colombian attacker broke his nose while scoring a late equalizer for the Amakhosi on the day.

Leonardo Castro’s return to fitness means he’s in contention to face Cape Town City tomorrow afternoon. A unique milestone lies ahead for the Kaizer Chiefs striker who joined the club from rivals Mamelodi Sundowns in 2018.

Leonardo Castro will make his 100th appearance for Kaizer Chiefs should he feature for them tomorrow evening. The attacker has 26 goals and 10 further assist in Amakhosi colours since joining the club.

“We’ve got nine games left. We need to get ourselves up there into the top five. I believe we can – there’s no doubt about it. We need to start this Wednesday against Cape Town City. They are one of the best teams in the league, but we have to do the job.” – Kaizer Chiefs head coach Gavin Hunt said.

“When we played them in Cape Town in January, we got two goals up early and then we started to give the ball away.

“A bit of slackness and nerves set in. We won, but it was not pretty at the end. We need to keep trying to build on the momentum. I think from where we were, we have come around a little bit. We can talk all day, but results are the bottom line at Kaizer Chiefs.”

Kaizer Chiefs host Cape Town City in the DStv Premiership clash tomorrow afternoon. Kick-Off is scheduled for 17:00 and this website will be providing you with live updates from the match.