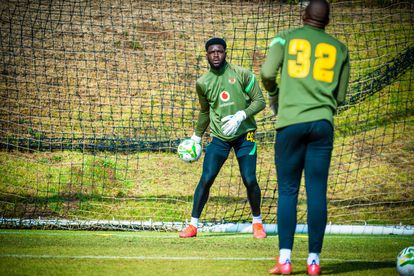 Nigerian Akpeyi has been in tremendous form for the Glamour Boys while Khune has played ONCE since last August – and that was in a MTN8 quarter-final defeat.

Du Plessis, now 54, told Kickoff that it would be foolish on Baxter’s part to try and fix something that isn’t broken in the Kaizer Chiefs goalkeeping department.

READ | KAIZER CHIEFS VS TS GALAXY: HOW TO WATCH THE NEDBANK CUP MATCH ON TV?

Du Plessis played over 200 matches in all competitions for Kaizer Chiefs between 1989 and 2023.

He also has two Bafana Bafana caps to his name.

Amakhosi will next be in action in a home Nedbank Cup Round of 32 match against TS Galaxy on Saturday, 12 February at 18:00.

READ | KAIZER CHIEFS LATEST: LEBOGANG MANYAMA ON HIS WAY OUT AT NATURENA?

“You stick with the in-form goalkeeper that’s it, simple,” Du Plessis said.

“I know Khune’s been doing well in this little competition that just passed but it was an international break, and whoever was in goals before then was performing, should remain in goals.

“Khune should just wait, there are only two things that happen to goalkeepers, they lose form or get injured.

“I know Khune is Khune, but the Nigerian was playing up until before the AFCON, he basically had the number one jersey, and should retain it.