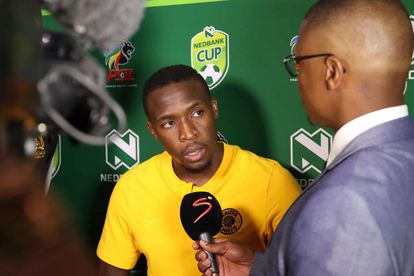 George Maluleka of Kaizer Chiefs during the 2020 Nedbank Cup Launch at the Nedbank HQ, Johannesburg on the 09 January 2020 ©Muzi Ntombela/BackpagePix

George Maluleka of Kaizer Chiefs during the 2020 Nedbank Cup Launch at the Nedbank HQ, Johannesburg on the 09 January 2020 ©Muzi Ntombela/BackpagePix

The 31-year-old was a subject of long-winded contract talks at Naturena, and eventually turned the offer placed on the table by the club down.

According to the Soweto giants, he has signed a pre-contract with the defending league champions, joining a string of players who have moved between the two big guns of South African soccer.

“The contract talks between Kaizer Chiefs and midfielder George ‘Mido’ Maluleka have reached an unexpected ending,” Kaizer Chiefs revealed via their official website.

“The Club offered the 31-year-old a two-year contract extension plus one-year option to renew on his current contract, but he turned it down.”

Chiefs also indicated that they were unaware that there had been contact between the player and Sundowns. According to Fifa rules, the Tshwane club were meant to notify them in writing before entering into negotiations with the player.

“Notably, Mamelodi Sundowns have not informed Chiefs about their engagements with George Maluleka as protocol dictates,” the club added.

The contract talks between Kaizer Chiefs and midfielder George ‘Mido’ Maluleka have reached an unexpected ending.

The Club offered the 31-year-old a two-year contract extension + one-year option to renew on his current contract, but he turned it down. #Amakhosi4Life pic.twitter.com/WBRvveaF1Q

From Naturena to Chloorkop

Maluleka follows in his namesake, George Lebese’s footsteps in terms of Chiefs stars making the move from Chiefs to Sundowns.

Lebese’s transfer, in August 2017, came with much fanfare, but the player’s career in Chloorkop failed to take off, as he featured in just a handful of matches in a season and a half at his new club.

There have been players moving the opposite direction, most notably Khama Billiat, who departed from the Brazilians on a free transfer after failing to negotiate a new contract in 2018.

The Zimbabwean international was more recently caught in a transfer controversy, with Sundowns attempting to lure him back across the Jukskei River during the early stages of the ongoing season.

The Maluleka saga comes just as Chiefs are grappling with the possibility of a transfer ban, which came as a result of their faciliating a move for Madagascar international Andriamirado “Dax” Andrianarimanana from Fosa Juniors to Naturena.

Maluleka joined Chiefs from Supersport United in 2014 after also turning out for Ajax Cape Town.

He has made over 100 league appearances for the Glamour Boys, the most recent being in the 1-0 home defeat to AmaZulu, where he donned the captain’s armband.