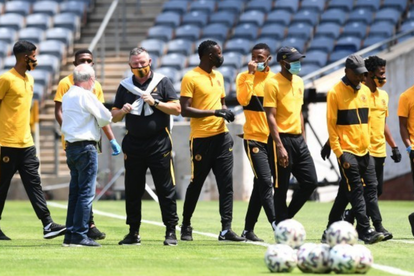 Gavin Hunt opened up about his transfer plans for Samir Nurkovic – get ready for this one Kaizer Chiefs fans!

Hunt was on the brink of releasing Nurkovic during his tenure at Amakhosi, according to iDiskiTimes.

What makes it even more fascinating is the fact that he wanted to bring Bradley Grobler to Chiefs. Imagine, the former PSL top goal scorer at Naturena, alongside the likes of Keagan Dolly and Khama Billiat.

That is quite the combo to think about… Indeed!

Here’s what the former Chiefs coach had to say about his transfer plans for Nurkovic:

BAFANA BAFANA: 3 THINGS WE NEED TO QUALIFY FOR THE FIFA WORLD CUP AND AFCON

WHAT HUNT SAID ABOUT NURKOVIC

“Last year when I got to Kaizer Chiefs he [Samir Nurkovic] wanted out,” explained Hunt.

“He was injured and he wanted out. There was an opportunity for Kaizer Chiefs to sell him but the problem was the ban. If we sold him for good money, we couldn’t replace him. So I understood where the club, Bobby and them, came from. Who are we gonna get? We can’t buy because there’s a FIFA ban,”

“I said ‘well he is not good to us now anyway, he is not playing. He’s not gonna play for six months now anyway and he never played. To be fair I thought he could’ve come back a bit earlier. But be that as it may, he still had the hump on his back about not being sold,” added Hunt.

He then described his ambitions to bring Grobler from SuperSport United to Amakhosi.

“To be fair, what was gonna happen was, we were gonna get Bradley Grobler last year.

Hunt is currently not coaching any side in the PSL but there are rumours of a potential move to Orlando Pirates.

Fast forward a couple of seasons later and not much has changed, Amakhosi are currently looking to bolster their attack and Nurkovic could very well leave Naturena come June/July.