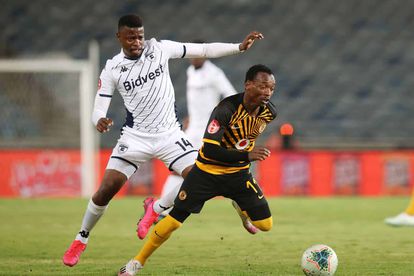 Khama Billiat of Kaizer Chiefs challenged by Phathutshedzo Nange of Bidvest Wits during the Absa Premiership 2019/20 match between Kaizer Chiefs and Bidvest Wits at the Orlando Stadium, Soweto on the 12 August 2020 ©Muzi Ntombela/BackpagePix

Khama Billiat of Kaizer Chiefs challenged by Phathutshedzo Nange of Bidvest Wits during the Absa Premiership 2019/20 match between Kaizer Chiefs and Bidvest Wits at the Orlando Stadium, Soweto on the 12 August 2020 ©Muzi Ntombela/BackpagePix

Kaizer Chiefs’ R7.5 MILLION could face a shock exit out of Naturena and into the hands of their rivals just before the transfer window closes!

Hunt is on the hunt for more Soweto giants.

First, he secured the signature of Siphesihle Ndlovu from Orlando Pirates and now he could place a bid for this Chiefs midfielder.

Hunt is interested in signing Amakhosi midfielder Phathushedzo Nange, according to SoccerLaduma.

He wants to beef up his side and bring in some experienced players.

Nange is the perfect player for Hunt and SuperSport United because he brings experience and quality into the midfield.

Furthermore, he is a quality midfielder who has fallen down the pecking order at Chiefs. Since the arrival of Yusuf Maart and Siyethemba Sithebe, Nange has hardly featured. Even when Maart was suspended by the PSL for two matches after receiving a red card against Richards Bay.

NANGE AND HUNT WOULD BENEFIT FROM THIS DEAL

For Hunt’s men, they could gain some much-needed experience after losing the likes of Bafana Bafana captain Ronwen Williams and Sipho Mbule to Mamelodi Sundowns. Nange was in fine formfor Amakhosi last season, earning a surprise but deserved call-up to the national side back in May this year.

Nange is currently worth R7.5 MILLION, according to Transfermarkt. This should not be an issue for Supersport United and Hunt given their recent blockbuster deals (Williams and Mbule). They have also not been very busy this transfer window. However, this is a move that could make a massive difference to both parties involved.

Do you think Nange should sign for Supersport United? Let us know your thoughts in the comments section below.