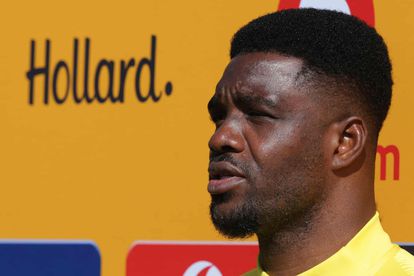 Axed Kaizer Chiefs goalkeeper Daniel Akpeyi has, not in so many words, hinted at his next destination, and it’s a PSL club that shares his vision.

In an interview with Robert Marawa on Marawa Sports Worldwide (MSW), Akpeyi was asked if Royal AM would be an option for him ahead of next season.

And Akpeyi spoke highly of Shauwn ‘MaMkhize’ Mkhize’s team, saying from what he has seen so far, Royal AM want to become one of the giants of South African football.

Akpeyi added that MaMkhize has put so much resources into the team to ensure that she achieves her objectives as the club owner.

And for that reason, Akpeyi said he wouldn’t mind joining Royal AM if they were to offer him a contract but perhaps he let the cat of the bag in the process.

“Well, I’ve read and I’ve watched them throughout the season and before the end of last season. They are a team that’s looking forward to being one of the big teams in the league, [and] in South Africa,” Akpeyi told Marawa.

“And that’s a good dream, and so far, the chairlady of the team is putting so much into the team to make sure that the team grows and becomes giants like the likes of Chiefs and Sundowns and all that.”

“So, it looks like a team that shares my vision of winning things and want to compete, and I wouldn’t mind if I have an offer from them. I mean, I wouldn’t mind joining such a team,” he said.

DID AKPEYI LET THE CAT OF THE BAG? READ HIS COMMENTS CAREFULLY

“In as much as ‘WE’ have calibres of players in the team that have the dream to win things [then] that is the most important thing,” he said.

Now, who is Akpeyi referring to when he says ‘WE‘? You be the judge, but everything should unfold in the next few weeks.