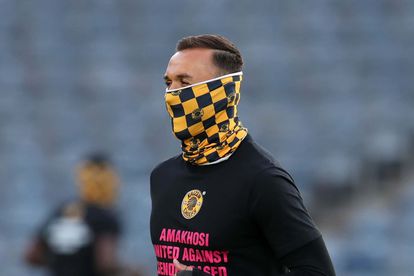 Kaizer Chiefs striker Samir Nurkovic has opened up about the frustration of watching his teammates from the stands as he was battling with injury at the start of the season.

Nurkovic missed the better part of the first-half of the campaign, and only recently returned to action to try and score goals for the struggling Amakhosi.

However, it hasn’t been as easy as it was last season with the Serbian striker only netting once in … matches he has featured in for Chiefs thus far.

Nurkovic, nonetheless, is eyeing redemption against Orlando Pirates on Sunday, saying he’s working hard to rediscover his goalscoring from.

“It was a difficult time for me and I missed out on pre-season,” Nurkovic told the media.

“I am trying my best to get to where I was before and hopefully Sunday will be my day,” he said.

Nurkovic revealed he’s not frustrated by his loss of form, reiterating that it’s down to his lack of pre-season.

“Not at all [frustrated]. When I came last season, we had a month-and-a-half to prepare but now I didn’t have pre-season. I came from recovery straight into the games.

“I just have to work hard and hope that the next game will be the game for me,” added Nurkovic.

SOWETO DERBY | CHIEFS WITH AND WITHOUT KHUNE AGAINST PIRATES [THE STATS]

Furthermore, Nurkovic said, like any other player, he also dreams of scoring in the Soweto derby but he feels it will be difficult to do so without the supporters out in the stands.

“It’s every player’s dream to score in a derby. It will obviously be difficult without the supporters, they’ve been our 12th player,” he said.

Chiefs will be without five of their key players in Dumisani Zuma, Itumeleng Khune, Lebogang Manyama, Leonardo Castro and Khama Billiat.

But Nurkovic believes Chiefs can compete with Pirates even without their big-name players.

“We try to stay positive all the time even when we lose the big players. We have a lot of young players in the team right now. We have to stay focused on this game.”