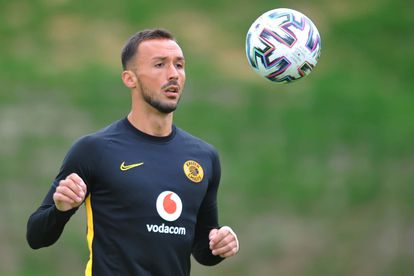 Nurkovic’s absence from the field of play has puzzled fans and foes alike with the striker having been linked with a move to Pitso Mosimane’s Egyptian side Al Ahly in the last transfer window.

Although it was confirmed that the 28-year-old had undergone groin surgery in September, it’s when he’s likely to make a reappearance for Amakhosi which has supporters wondering.

Chiefs and their coach Gavin Hunt have given contrasting updates over his availability.

HUNT DROPPED SOMETHING OF A BOMBSHELL

While the club appeared to suggest he wasn’t ready for selection, Hunt dropped something of a bombshell when revealed that in fact he’d been fit for over two weeks prior to their last match last Tuesday against Black Leopards.

Read about those comments from Hunt HERE.

That comment won’t have helped clear up the confusion.

Chiefs could certainly do with Nurkovic making a return to action as they are currently down in 12th in the standings after six matches.

In those six matches they have scored just five goals.

Chiefs are next in action against SuperSport United in the DStv Premiership at the Lucas Masterpieces Moripe Stadium on Tuesday, December 15.

IN CLOSING | ‘MICHO’ ARRESTED IN PE: WHAT HE SAID – AND DID – TO THE WAITRESS