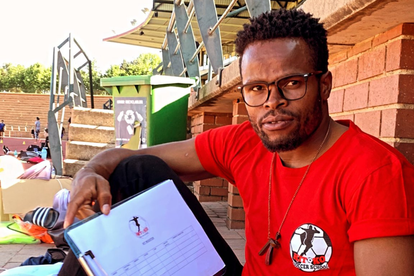 Former Kaizer Chiefs footballer Willard Katsande has a lot more to offer beyond a great tackle, a hard-labour shift in midfield, and passing skills. The former Warriors international knows his way around business ideas.

Honestly, this looks better than any other similar post-career moves we’ve seen before. There is something special about the presentation of the Kitoko Soccer School.

Some of you may have already known about the project since it was announced as ‘coming soon’ late last year.

Katsande has, on Tuesday, announced that the Kitoko Soccer School is “up and running.” The Sekhukhune midfielder revealed the update on social media with an image that included what looks like registration forms or service products.

“We up and running @kitokosoccerschool,” the Kaizer Chiefs legend said.

By the way, in case you’re questioning Katsande’s status as a legend at Naturena, he won two league titles and played over 300 games for Amakhosi.

In other related news, the 36-year-old from Zimbabwe’s Mutoko recently lent a big helping hand to the former Orlando Pirates defender Lucky Lekgwathi.

Lekgwathi’s Grootman restaurant in Pretoria was left in total ruins after severe looting attacks from locals. After a prolonged struggle, Katsande appeared like an angel to salvage Lekgwathi’s business and financial future.

“I’m humbled and grateful because at last we managed to launch or to re-open Grootman and the launch went very well,” Lekgwathi told iDiski Times.

“We found the site where to start the shop, I remember I was busy with MTN 8,” he added.

“My business partner met with him [Katsande] because he has a construction business so he said he can help us to set up the shop and the shop looks nice.”

“He’s done a great job, you know, with reasonable costs and not forgetting one of my friends Pule, he came in, because I think there was a time where he (Katsande) was busy so Pule came in to finish the touch-ups.”