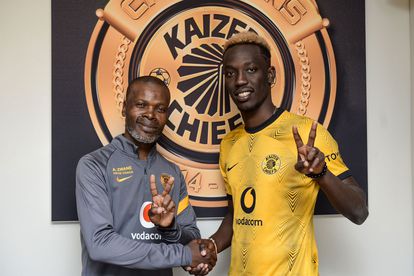 Bonfils-Caleb Bimenyimana has become the second Burundi international to play for Kaizer Chiefs, but who remembers the first?

Bimenyimana joined Chiefs on a two-year deal on Thursday afternoon, and this was some weeks after undergoing a successful trial at Naturena.

Just over a week ago, Bimenyimana went on a public rant, lashing out at Chiefs for making him wait without any form of communication.

However, his frustration is a thing of the past as he will now part and parcel of the Chiefs setup for the next two seasons and possibly beyond if he does well.

And apart from being the second Burundi international to don the gold and black jersey, he is also Amakhosi’s second foreign international this season after Edmilson Dove.

NAHAYO IS THE FIRST BURUNDI PLAYER TO DON THE KAIZER CHIEFS JERSEY?

It was in the 2008-09 season when Chiefs signed Valery Nahayo from Jomo Cosmos on a three-year deal. Yes, Nahayo the lanky defender.

Nahayo was a tough-tackling centre-back who gave it his all during his time with Chiefs before securing a move to Belgian side KAA Gent in 2011.

He left having featured 51 times for Chiefs, and during that period, Nahayo scored twice and provided a single assist despite being a defender.

In his first season, Nahayo played 17 league games but his second year wasn’t too good as he featured just five times for the Soweto giants.

Nahayo would amass 29 competitive matches in his third and final season with Chiefs, and his performances during that campaign proved enough as Gent came to sign him.

Will Bimenyimana live up to the high expectations at Kaizer Chiefs?