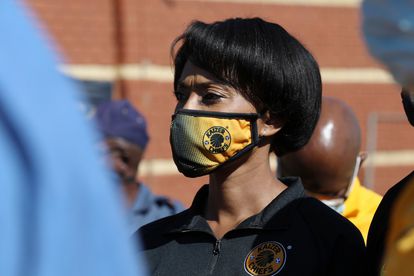 Kaizer Chiefs marketing and commercial director Jessica Motaung has weighed in on the ongoing saga between the club and the PSL.

READ | KAIZER CHIEFS VS SUPERSPORT UNITED: HOW TO WATCH THE MATCH ON TV

The two parties will face off in court in May as the PSL seeks to review the arbitration award that went in favour of Chiefs for the two missed fixtures in December 2021.

In an interview with Thabiso Mosia on Metro FM on Friday, Motaung said she was baffled by what is going on, saying the arbitration award should be final and binding without involving the courts.

Motaung said the sudden cases thrown at Chiefs by the PSL are suspicious in the sense that they feel targeted by the league.

Nonetheless, Motaung is still hopeful that sanity will eventually prevail, before adding that the leadership at the PSL should do a lot of self-introspection.

And in the meantime, all that Chiefs need to do is to focus on themselves and worry less about whatever is going on around them, said Motaung.

JESSICA MOTAUNG QUESTIONS IF KAIZER CHIEFS ARE BEING TARGETED BY PSL

“This whole situation with the case is one that I’m just quite baffled about here in South Africa. First of all, we all know the rules of the game and the fact that arbitration is supposed to be final and binding,” said Motaung.

“So, I’m quite surprised, it’s actually quite shocking and I’m quite sad that we started having our football governed through the courts. That’ll be quite a pity. I’m hoping that there will be some reasonable engagement around that.”

“Obviously, we were very clear in the direction that we took and we’d love to play the games. It’s just very disappointing, we say we’re a rules-based organisation, then can we stick to our own rules?” asked Motaung.

“And suddenly, all of a sudden there are certain cases coming up against us but you know what, at the end of the day, we as a club will focus [on ourselves] and do the job,” she added.

“But I just think that there has to be a leadership introspection to say, ‘where are we going as South African football, where are we going as a country in terms of our football to make sure that we don’t focus on. Is it personal or picking on specific clubs or making sure that the game is looked properly after?’.”

“For us, we are glad that the arbitration is on our side and we hope that sanity will prevail, and I know that the case is subjudice So, I’m not going into further details.”

“I just feel it’s some of the things that have suddenly started to surface, it just feels like ‘are we, as Chiefs, being targeted?’ I’m not sure but all I can say is that we will focus and make sure that we represent this league and what football has been for this country with distinction,” added Motaung.

Woolworths trials ‘bag share’ at these FOUR stores in Mzansi