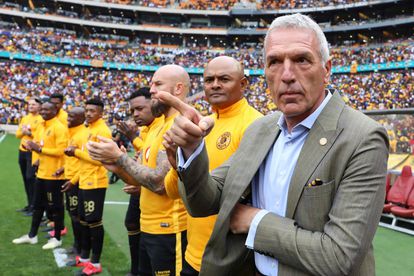 Ernst Middendorp, coach of Kaizer Chiefs during the Absa Premiership 2019/20 match between Orlando Pirates and Kaizer Chiefs at the FNB Stadium, Soweto on the 29 February 2020 ©Muzi Ntombela/BackpagePix.

Ernst Middendorp, coach of Kaizer Chiefs during the Absa Premiership 2019/20 match between Orlando Pirates and Kaizer Chiefs at the FNB Stadium, Soweto on the 29 February 2020 ©Muzi Ntombela/BackpagePix.

Chiefs are on course for a first trophy since 2015, but need to keep their composure at a vital stage of the season.

Goalkeeper Daniel Akpeyi showed heaps of it during the victory over Pirates. A series of superb saves earned him the Man of the Match award.

“First of all I want to thank my Lord and Savior Jesus Christ who has made this day possible for me,” Akpeyi told SuperSport TV after the derby.

“Second of all, I want to share this award with my coaches, because since day one they are the ones that actually believes in me following what happened two weeks ago [a mistake against Maritzburg United].

“When these people [fans around the stadium] turned against me, they stood by my side and believed in me and we as a team we have it at the back of our minds that we’re the only ones on the field, it’s only when it’s good you get the support but when it’s not good you get turned down.”

Usuthu have struggled for goals all season bar Bongi Ntuli and they are likely to struggle against Kaizer Chiefs, particularly with coach Jozef Vukusic having been placed on special leave.

Prediction: This is a mismatch on paper with Kaizer Chiefs expected to stroll to a comfortable victory. Bookies have given Amakhosi a massive 80% chance of success, although to be fair, they usually only win 40% of such fixtures.