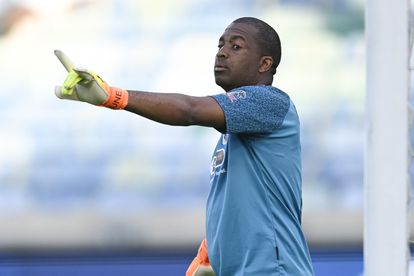 Kaizer Chiefs legend Itumeleng Khune has not started a DStv Premiership this entire season but will have his last chance to impress Stuart Baxter in what is essentially a PSL trial.

Khune is a PSL veteran and legend and an Amakhosi legend too.

When he takes to the field for Warriors FC in the final of the DStv Compact Cup he will be essentially on trial for Kaizer Chiefs PSL side. This is also very likely to be his final chance to impress Stuart Baxter on a big stage.

Daniel Akpeyi has been the preferred choice for Chiefs. He is their current first-choice and regular starter and one of the main reasons Khune is struggling for gametime at Naturena.

He made his much-anticipated return to action in the semi-final against Amabutho last weekend. Proving instrumental in his side’s 2-1 victory.

Khune made vital saves and was the difference between the teams on the day.

His display caused rave reviews and now all eyes are on him – including Baxter who will be on the sideline at FNB Stadium. Now the former Bafana Bafana keeper has one final chance to earn his starting jersey back!

If he puts in the same kind of performance as last weekend, he could very well see a lot more gametime in the second half of the PSL.

Can Khune inspire Soweto to make history at FNB Stadium?