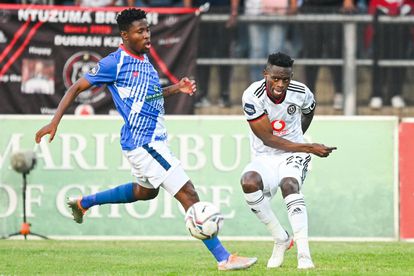 Orlando Pirates captain Innocent Maela says winning the MTN8 will lessen the stress they’ve been under caused by a trophy drought.

The Buccaneers have a golden opportunity to end a two-year trophy drought when they take on AmaZulu in the MTN8 final on Saturday, 5 November.

This was the last trophy they lifted in 2020 under the guidance of coach Josef Zinnbaeur.

Maela, who was appointed as the captain of the club following the exit of Happy Jele, says winning the MTN8 would bring them huge relief.

“We definitely want to win trophies all the time but I don’t think winning on Saturday, which we intend to do, will lessen the pressure,” Maela told the media as quoted by KickOff.

“You know the pressure is always there whether you are playing a cup final or an ordinary league match.

The left-back couldn’t finish the last game due to injury and it is yet to be confirmed if he will be fit for Saturday’s match.

“I think it’s true, I mean people saw that I couldn’t finish the match because of a niggle that I had but we are still busy with the team doctors and the physios so it’s still too early to tell,” Maela said.

“I feel good, I feel confident and we will see as the week goes by, but nothing confirmed as yet.”