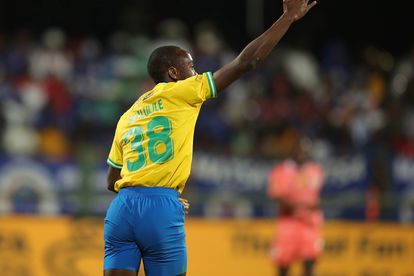 Mamelodi Sundowns are preparing for their return to the DStv Premiership action with an away trip to KwaZulu-Natal to face Maritzburg United on Tuesday after they were eliminated at the semi final stage of the MTN8.

Masandawana sit at the top of the domestic league table with seven wins from their opening 10 games and have won two of their five encounters against the Team of Choice, also recording two draws and a loss. Maritzburg have only won once against Sundowns in the past five matches, claiming the victory in their last meeting in March.

One of the big question marks hovering over Sundowns has been the absence of superstar striker Peter Shalulile. Last week, Sundowns coach Rhulani Mokwena revealed that he was battling with a complicated muscular injury.

Mokwena stated that the players was seeing “various specialists to get different opinions”, and now according to MTNFC, Shalulile has already undergone surgery on a hernia injury.

The article further states that club is now anxiously awaiting a prognosis on the likely timeline for his recovery.

It’s generally understood that if all goes well, light activity can be resumed after about two weeks for this sort of injury, while full recovery generally takes anything between four to six weeks.

While Sundowns will be hoping for the best possible news, they may have to face the prospect of being without the 29-year-old for at least the month of November. Yet the somewhat fortuitous news is the fact that the 2022 FIFA World Cup break is around the corner, with competition only set to return just before the New Year, when there might be a very different injury scenario for Shalulile.

After the Brazilians fell to defeat against Pirates this past weekend, Sundowns’ Manqoba Mngithi acknowledge the unavailability of Shalulile was a big factor

“For sure, we will be lying if we said we are not missing Peter. We tried the best we can to not expose to everyone that he is out because we know that everyone knows how dependent we are in his ability to finish our chances and to pose a lot of threat. He also gives us a chance from the first line of defence with his high press and speed.

“That certainly had an effect on the whole team but we were consoling ourselves with the number of goals we scored prior to this match, but we knew for a fact that at some point if we don’t take our chances, we might be exposed that we might not have a player of Peter Shalulile’s calibre.”

Sundowns are still top of the DStv Premiership standings

Currently, Sundowns are still top of the DStv Premiership standings (claiming seven wins from 10 games) even though they have played less games than their rivals, but they haven’t been as clearly dominant so far this season.

In bombshell news on Monday, Sundowns announced significant changes to their technical team, with Mokwena becoming the sole head coach, and Mngqithi ‘demoted’ to senior coach.

The club openly admitted that the changes to their coaching setup were ‘necessitated by the poor performances and unconvincing victories’.