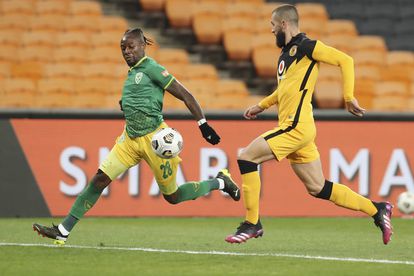 Golden Arrows in action against Kaizer Chiefs during a previous game. Photo: Twitter

Golden Arrows in action against Kaizer Chiefs during a previous game. Photo: Twitter

Chiefs were scheduled to play Arrows at the Princess Magogo Stadium in Durban on Wednesday night, but on Tuesday, Amakhosi dramatically confirmed they would not be able to fulfil the fixture as a result of a widespread Covid-19 outbreak in their camp.

The PSL has said nothing on the matter since the news first emerged about the positive cases in the Chiefs camp that have risen to over 35.

SAFA previously made it very clear that they will send officials and that procedures will be followed as normal if there is no official communication, and Arrows seem to have followed a similar route after choosing to still arrive at the Princess Magogo Stadium in Durban.

On their Twitter account on Wednesday night, Golden Arrows published a video of them arriving at the stadium to honour their fixture, despite knowing that the Chiefs team would not be present to play.

The clip of Arrows arriving can be watched below:

Arrows are owned by the PSL’s acting chief executive officer Mato Madlala, and that may well have been a factor in the decision, while it could cast them in a favourable light when a decision is finally made about how to deal with the continued Chiefs no-shows.

“In the absence of official correspondence which should be sent by the Premier Soccer League, in the absence of that the officials will follow their normal procedure,” stated Abdul Ebrahim (SAFA head of referees).

“Yes, we do know about what is happening, what is going on. But we cannot take instruction from any club with regard to whether a match can be played or not.

“We receive a fixture, we do the necessary, the match officials have a procedure that they do follow and it will get followed unless we do receive official correspondence that the match indeed has been postponed.”

In totality, it’s understood that Chiefs wanted the PSL to postpone the matches against CT City, Golden Arrows, Sekhukhune United, Royal AM and Maritzburg United.