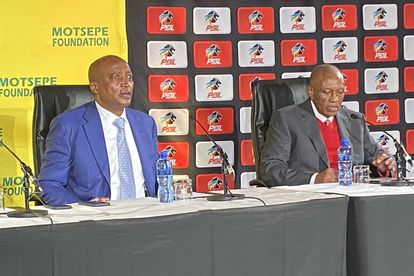 CAF president Patrice Motsepe has come to the rescue of the PSL through the Motsepe Foundation to take over sponsorship from GladAfrica.

In a joint press conference held on Friday, the PSL, through chairman Dr Irvin Khoza, confirmed that the National First Division will now be known as the Motsepe Foundation Championship.

The Motsepe Foundation is expected to pump in millions of Rands to the league in order to help sustain teams financially and increase the competitiveness of the league.

Under the GladAfrica umbrella, teams in the National First Division (NFD) used to receive a monthly grant of R500 000.

But they are now expected to receive more, especially given how club bosses previously complained about the difficulty of running clubs with limited financial resources.

Now, with the Motsepe Foundation in charge, teams could well be in a position to financially compete among themselves.

This is a second South African league that Motsepe, through his foundation, will be sponsoring after the ABC Motsepe League.

“We would like to thank the PSL and its Chairman Dr Khoza for his relentless efforts to attract sponsors and partners to the PSL,” said Motsepe.

“It is an honour for the Motsepe Foundation to make a humble contribution to the development and growth of South African football and to make it amongst the best in Africa and globallly.”