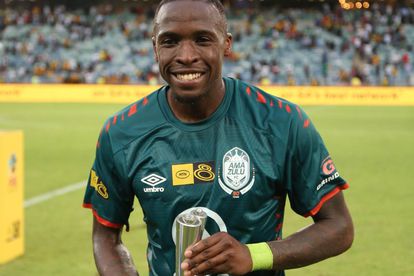 AmaZulu midfielder George Maluleka says it was a pleasure to rub shoulders with his former Kaizer Chiefs team-mates in the MTN8 semi-final second leg.

Usuthu held Amakhosi to a 0-0 draw and booked their place in the MTN8 final through their away goal advantage after they scored in the first leg that ended 1-1 earlier this month.

Playing their first cup final since 2010, AmaZulu will be up against Orlando Pirates who eliminated Mamelodi Sundowns at the New Peter Mokaba Stadium on Saturday.

In their goalless draw on Sunday, Maluleka was a standout performer and won the man of the match award for his efforts.

‘Mido’ says he’s got “so much love” for the Glamour Boys whom he left in 2020 to join Mamelodi Sundowns.

“I’d like to thank the supporters, AmaZulu faithful, the coaching staff, the players, my colleagues, I think we fully deserved the win,” he told SuperSport TV as quoted by Soccer Laduma.

“I think from the first leg as well, again today a game of two halves but fully deserved.

“It was very important that we stick to the game plan and we did, we kept a clean sheet, something that we’re struggling to do but we were able to do that today and we’re through to the final.

“It’s always a great pleasure to rub shoulders with the guys again, my former team, I’ve got so much love for team, the history.

“The chairman also 78 (birthday), so it’s rich history, I’ve got so much love for the team, lot of respect, no love lost.”