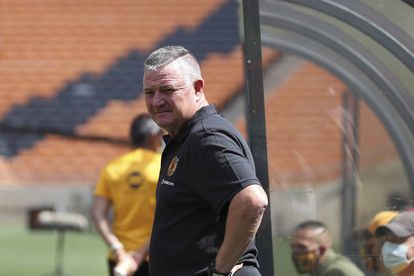 Gavin Hunt has added a new member to the Kaizer Chiefs first team ahead of Sunday’s Nedbank Cup match against Richards Bay FC.

In his pre-match media briefing, Hunt confirmed signing Sabelo Radebe from the club’s Diski team, and the coach hopes to have him in the team for the upcoming encounter.

“I brought a guy up from the Diski team last week, well he’s been here for two weeks now. I saw him play once and said, ‘he’s got to come to the first team’,” Hunt told reporters on Thursday.

“I played him yesterday in a little friendly game, and he was outstanding. He’s another [promising player]. So, hopefully, I’m going to register him and we might put him in the team for the weekend.”

Radebe joins his former Diski teammates in Darrel Matsheke and Lebohang Lesako who were recently promoted to the senior team.

And Hunt admits he will be very pleased if the man known as ‘Bibo’ can play half as well as Thandani Ntshumayelo at SuperSport United.

“He’s another one that’s come through and we’ve got quite a few at the moment. His nickname is ‘Bibo’. If he can play half as well as the Bibo I had at SuperSport, who I gave a chance to [I will be happy],” concluded Hunt.

Amakhosi have had to improvise in terms of player personnel due to the transfer ban imposed by Fifa early last year.

Their efforts to have the two-window ban overturned proved futile as the Court of Arbitration for Sport (CAS) found Chiefs guilty of illegally signing Madagascan and now Black Leopards midfielder  Adriamirado ‘Dax’ Andrianarimanana.