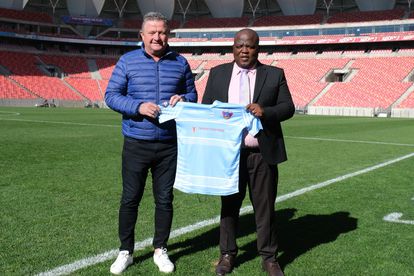 Gavin Hunt was left disappointed with his side’s performance after they lost for the first time this season.

After an opening day victory against Sekhukhune United as well as holding the defending champions Mamelodi Sundowns to a draw, Chippa United’s loss against Royal AM meant the honeymoon phase is over for Gavin Hunt.

Royal AM earned a 1-0 victory over the Chilli Boys thanks to a Victor Letsoalo penalty however according to Gavin Hunt, the soft penalty was dubiously awarded to the hosts.

“It was really disappointing because we deserved more from the game but we couldn’t get what we wanted,” Chippa United head coach Gavin Hunt said as quoted by TimesLive

“For most of the game we played okay but obviously we lacked just a final ball in certain areas but we will keep grinding away. There’s lot to improve, but I think we deserved more than what we got from this game.

“I thought we really worked our socks off and I am proud of the players. I don’t know if it was a penalty I couldn’t see from where I was sitting. It was little bit harsh,”

Gavin Hunt’s side are next in action against familiar enemies Orlando Pirates over the weekend. Chippa United sit in seventh position on the DStv Premiership log standings.