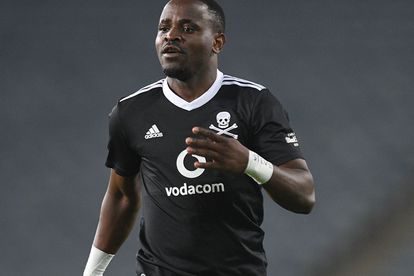 Ex-Orlando Pirates striker James Mothibi says the Buccaneers need to think twice about the future of Malawi’s Gabadinho Mhango at the club.

Ex-Orlando Pirates striker James Mothibi says the Buccaneers need to think twice about the future of Malawi’s Gabadinho Mhango at the club.

Mhango, 29, has struggled for game time at the Soweto giants during the current 2021/22 season, having only made four appearances to date.

Sadly, the only headlines Mhango has made of late have been off-field issues which has led to Mothibi questioning his commitment to the club.

Gabadinho Mhango’s agent Mike Makaab has confirmed that Orlando Pirates have exercised the two-year option on Mhango’s deal to keep him until at least 2024.

READ | KAIZER CHIEFS TRANSFER NEWS: THE ONE PLAYER TO WATCH AT AFCON

In positive news for Mhango, he has been included in Malawi’s squad for the Africa Cup of Nations (AFCON) which starts today in Cameroon will concludes on Sunday, 6 February.

In an interview with Soccer Laduma, Mothibi offered his thoughts on Mhango and his future at Orlando Pirates.

“When Mhango signed for Pirates, I saw him as someone who was going to assist the club to move forward but the only concern that I had about the boy and not necessarily a problem was his attitude towards to the game.

“I’m not talking about the attitude towards coaches or the team but to himself and his family and the football fraternity. There is a positive attitude and a negative attitude but I do suspect that the management must have called him to warn him that he is not bigger than the club.

“I still regard Mhango as a good player and I liked him from the very first day he arrived at Orlando Pirates because of the work-rate I saw from him from BidVest Wits and from his national team.

“It was a good call for Mhango to get the national team call up for him to go and get game time as that will assist Orlando Pirates to have a second look at him. If they were thinking about letting him go, I think they must think twice and have patience with the boy.

“These boys do sometimes go off the rails and it is our duty as former players and management to get them back on the right path by motivating them. Pirates is a big club and the boy should acknowledge that he has made mistakes and be grateful that there are people who are giving him a second chance,” Mothibi concluded.

Mhango has splayed 55 matches and scored 12 goals for Malawi in all competitions.

The Flames has a tough draw at AFCON as they find themselves in Group B alongside tournament favourites Senegal, Zimbabwe and Guinea.

Malawi will begin their campaign against Guinea on Monday, 10 January at 18:00 SA time.

Mhango has played 67 matches for Orlando Pirates since signing from Bidvest Wits in July 2019.

He played 65 times for the Students, 46 for Bloemfontein Celtic and 15 for Golden Arrows.