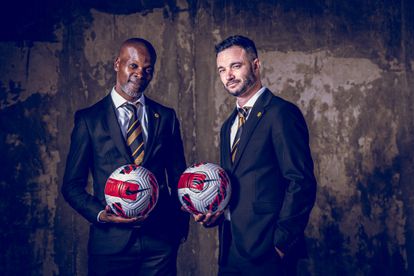 At a media briefing at the FNB Stadium on Thursday, Chiefs first revealed there would be a “massive club announcement”, and then duly confirmed that Zwane will be taking on the top job permanently on a three-year deal.

Meanwhile, it was also revealed that Dillon Sheppard will serve as Zwane’s assistant.

Chiefs released the following statement in relation to the appointment:

Soweto-born Zwane has previously stood in as the head coach on a temporary basis at various times in the past – most recently in April following the departure of Stuart Baxter – where he led the team for the final seven league matches of the 2021/22 season.

Earlier in the campaign he had taken the helm for three matches leading up to the festive break during the Covid-19 outbreak in December 2021. He was also in charge towards the end of last season, overseeing the team in the last two DStv Premiership matches of the 2020/21 season and the two-legged CAF Champions League semi-final against Wydad Casablanca.

He won the league matches and managed to sneak the team into the top 8 on the last day and qualified Kaizer Chiefs for the historic CAF Champions League finals.

With 22 years of service under his belt, Zwane is as steeped in the traditions and culture of Kaizer Chiefs as one can be. He enjoyed an illustrious career as a skilful winger, amassing 32 goals in 252 appearances in all competitions for Amakhosi. Between his arrival in 2000 and his retirement a decade later he helped the Club to win 12 major trophies, including the CAF Cup Winners Cup, 2 league titles, the MTN8, Coca Cola Cup, Absa Cup, BP Top8 and the Telkom Knockout.

In addition, he represented Bafana Bafana nine times on the international stage.

He retired in 2010 to become assistant to Vladimir Vermezovic at Kaizer Chiefs and worked with the first team until May 2012, maintaining his role under Doctor Khumalo and Ace Khuse after they replaced the departing Vermezovic late in the season.

Shifting focus, he began working with the Chiefs Youth Academy Development programme in 2012, holding posts with the U-13, U-17 and U-19 teams for a period of four seasons before moving up to coach the Club’s Reserve Team.

During his time in the Youth Development structures, he helped discover and produce players such as Siyabonga Ngezana, Nkosingiphile Ngcobo, Siphosakhe Ntiya-Ntiya, Sabelo Radebe, Njabulo Blom, Bruce Bvuma, Mduduzi Shabalala, Bontle Molefe, Keletso Sifama, Lebohang Lesako, Darryl Macheke, Thabo Mokwena and Happy Mashiane, as well as the likes of Lorenzo Gordinho, Zitha Kwinika, Given Thibedi, Sanele Tshabalala and Wiseman Meyiwa. He went on to win the inaugural Multichoice Diski Shield in 2018 with most of these players.

“We would like to take this opportunity and congratulate coach Arthur Zwane for this big appointment. The plan we have been working on for many years of appointing Arthur as our Head Coach has come to fruition. After seeing his passion for the game and his willingness to learn, we have been looking to bring him through to lead the senior when the time is right and we believe that time is now. We are also grateful that he has been patient and continued to work hard to advance his coaching skills and abilities by educating himself, which is key in the modern game,” Motaung said following the announcement.

“Arthur is the someone who grew up at Chiefs and has a full understanding of our culture. We did say last year when we appointed the Sporting Director and Head of Technical that we wanted them to work with people who understand our philosophy. This is important as the coach works closely with those two gentlemen on a daily basis,” the Chairman added.

Zwane gained international experience when he was called up as an assistant coach for Bafana Bafana in 2020 and 2021, working with Molefi Ntseki, who is now Kaizer Chiefs’ Head of Technical and Development.

Kaizer Chiefs Sporting Director Kaizer Motaung Jr., who played with Zwane said, “It is no secret that we have had a number of challenging seasons over the last few years. We have had to make decisive changes in leading us to what we strongly believe will lay the foundation for long term success. We are confident that our supporters and all those who are associated with the Kaizer Chiefs brand will have something to smile about soon.”

“One of the main reasons the Club decided to appoint Coach Arthur Zwane is his deep understanding of the Kaizer Chiefs playing philosophy and his incredible work ethic. His innovative and modern approach to the game has made him the ideal candidate to drive this unique project into the future,” Motaung Jr. added.

Coach Zwane will be assisted by Dillon Sheppard, who joined Chiefs in 2020 as assistant coach.

Sheppard, a product of the School of Excellence, played top flight football for a number of teams locally and internationally (Russia and Greece) for 19 years.

The two have been working together as assistant coaches over the last two seasons and have built trust and incredible synergy.

“We are all working with the coach to recruit a number of players in key positions who fit the profile of what we are looking for,” said Football Manager Bobby Motaung. “This is how we look to build a strong and formidable team for the new season and beyond. We have a number of great football minds within our technical structure and we believe we will bring players who will add value when they get to Chiefs.”

Zwane and his technical team will start their duties immediately to plan for the new season.