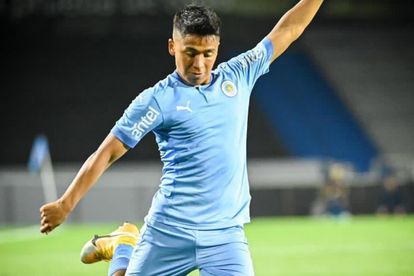 So far, Sundowns had made a couple of big ‘official’ signings, with Sipho Mbule recruited recently, while earlier this year the Brazilians secured the services of Abubeker Nassir from Ethiopian Coffee after undergoing a successful trial.

Other recent reports had linked Sundowns with talented Moroccan defender Abdelmounaim Boutouil, and this has now been confirmed by his parent club SCC Mohammedia. This past week it was revealed that Bafana keeper Ronwen Williams has joined Sundowns as well.

In a notable report by KickOff.com, Chilean midfield sensation Marcelo Allende is now also set to move to the DStv Premiership champions on a three-year deal from Montevideo City Torque. Allende had joined the Uruguayan club on a free transfer in January 2020.

“In order to get him out of the club belonging to the City Football Group, Mamelodi Sundowns had to pay three million dollars, an extremely important figure for the charruas, who in 2020 transferred to the club on a free deal,” reads part of a report in Chilean publication Encancha.

“After completing his move to Magallanes, the player was released and ended up signing in the Uruguayan capital at zero cost.”

Highly-regarded coach Martin Lasarte has said it’s understandable that Allende would make a big-money move to a “big team”.

“It’s a big team. Just as it may surprise Allende to go to South Africa, it would also surprise what they have paid for him and the salary he will have,” he told En Cancha.

“I am happy for Marcelo; he deserved a sports opportunity which did not appear, and this possibility arises that, in addition to sports, it is economical.”

Sundowns are preparing for another big season

Mamelodi Sundowns returned to pre-season training at the beginning of the month ahead of a busy month of preparation for the upcoming 2022/23 campaign.

After a relentless season fighting on all fronts until the very end, Bafana Ba Style officially went on holiday after their parade in Tshwane for four weeks. Masandawana reported back to Chloorkop on July 1, for medical tests ahead of the new season. The following Monday, players and the technical team stepped up to the field to have their first field session in full swing and proceeded to train for a week at their home facilities.

“The first week of our Pre-season [included] intense testing. The work that is done by not just our medical department but also from the conditioning department in assessing the players’ physiology and the physical readiness of the players to take part in full team training, we were very satisfied with that and the information that we received was very good,” briefly explained The Brazilians’ co-coach, Rulani Mokwena.

Downs made their way to Royal Marang in Rustenburg in their next phase of pre-season preparations which will begin on August 6, with the Tshwane derby in the MTN8.

“The camp in Marang gives us a lot of possibilities, we are not people that train in isolation or train different elements or factors that contribute to the performance. From day one already we were working with the physical aspects, but already introducing a new tactical and technical concept that we’d like to work on and to improve,” added Mokwena.

“These were ideas that we had already from last season, there were things that we felt we had the condition to be better at, but maybe we didn’t have the possibility. Now that we have a bit of time to train and to prepare the team, we focus a lot more on the tactical aspects and try to make sure that we prepare the team in that regard because during the season we don’t have the time to prepare and train.”

Masandawana have a pre-season exhibition match against Richards Bay FC in the semi-final of the annual Prince Mangosuthu Legacy Cup taking place in KwaZulu-Natal on Saturday, July 23.

Queen Elizabeth II: Will the diamond ‘stolen’ from SA be returned?

On This Day: What happened on 9 September?