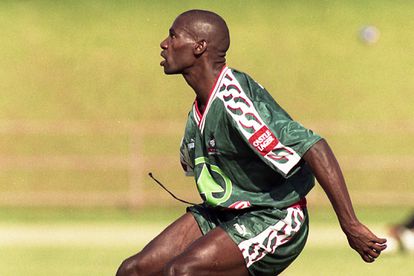 Former PSL striker Sandile Ndlovu says Royal AM need to slash their squad and get used to life in the DStv Premiership sooner rather than later. ©Gavin Barker/BackpagePix

Former PSL striker Sandile Ndlovu says Royal AM need to slash their squad and get used to life in the DStv Premiership sooner rather than later. ©Gavin Barker/BackpagePix

Former PSL striker Sandile Ndlovu says Royal AM need to slash their squad and get used to life in the DStv Premiership sooner rather than later.

The club recently purchased the PSL status of Bloemfontein Celtic then changed it’s name and relocated the club, staff and players to KwaZulu-Natal.

At present there are reportedly as many as 62 players on the books of the club.

According to reports – which were denied by new owner Shauwn Mkhize – Royal AM are in financial difficulty.

Ndlovu, now 41, played 48 matches for Swallows, 21 for Maritzburg United, 20 for Bloemfontein Celtic and three for Mamelodi Sundowns during his career.

He also has a single cap for Bafana Bafana.

Ndlovu told Soccer Laduma, the sooner Royal AM lets go of players and sends others on loan the better as they can then focus on avoiding relegation from the DStv Premiership.

“Royal AM should’ve trimmed their squad, they now playing in the DStv Premiership. This thing of having a big squad while you new in the topflight can be dangerous.

“Some players need to be loaned out especially those that were competing in the GladAfricaChampionship.

“I suspect there will be divisions and if they don’t make it right now, they will suffer because there are players and coaches coming from Celtic and those that were with the club in the GladAfrica Championship.

“The clash of egos might end up creating problems if they don’t address it. Things could be uncontrollable but we hope it won’t get there because that would be the end of them, football is also a game of influences, good or bad,” Ndlovu concluded.

Royal AM are currently second-from-bottom of the DStv Premiership after an away 1-0 loss to Swallows and a 2-1 home defeat against Cape Town City FC.

They will next be in action at home against Chippa United on Sunday, 12 September at 15:00.

PICTURES | ITUMELENG KHUNE AS YOU’VE NEVER SEEN HIM BEFORE!